How to crack the holiday hiring code 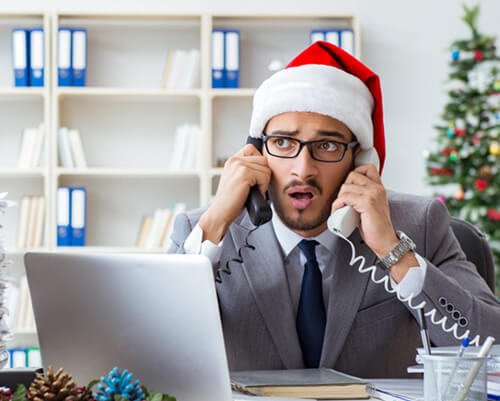 Getting the best people on board for the holiday season is often a worry for companies, but a well-thought-out hiring strategy could make this a breeze

Deck the halls with boughs of holly

'Tis the season to be jolly

No – this piece is not about Christmas, or about the tradition of carol-singing. It does, though, have a holiday connect, in as much as it is about holiday hiring. Let’s look at some numbers to shed more light.

The fall season has just about begun, but retailers are well and truly wrapped up in the holiday spirit. A number of companies announced their plans for hiring in the holidays even before summer ended, and the demand for workers is high. Data from a holiday hiring survey by Indeed.com shows that there was an 11% rise in holiday job searches for every million job seekers in August, from the same time a year ago.

What are we talking about, again?

Holiday hiring. This refers to hiring people to cater to the rush of shoppers and other customers during the holiday season. Logically, this implies that the hiring would be of a temporary nature, as the rush subsides once the holidays and festivities have ended. Job postings for the holiday season typically have one or more holiday-related terms in the job title, such as “holiday,” “seasonal”, and “Christmas.”

Why is it a source of worry?

The rise in searches for holiday workers is not necessarily a sign of an incoming holiday hiring boom. Sample this:

Unemployment in the US is at a 50-year low: just 3.6% in Spring 2019. And there is always the sword of the ongoing trade war between the US and China, along with rumblings about a possible recession – hanging above the heads of retailers.

This has only deepened the shortage of workers in the holiday season. And the race to stay ahead of the rest when it comes to picking the best talent from among the limited numbers of jobseekers could create panic among other employers, especially those that are not big brands. The need to compete for talent in this holiday season is a possible source of great worry.

Why are fewer people being hired?

Hiring rates are lower than in previous years, in part due to the rise of e-commerce. This has affected the composition of hiring, with many retailers expected to shift seasonal hiring to transportation and warehousing positions. US retailer Target, for instance, has said it would dedicate 8,000 workers to its distribution and fulfillment centers (up from 7,500 from last year), and double the number of in-store workers who work on fulfilling e-commerce orders.

There are a lot of theories floating around!

You bet there are! Let us debunk a few:

The truth is out there too, though!

But what do temporary workers want?

Many things. Surprise, surprise: compensation and perks are low on the reasons for accepting one temporary job over another, with work hours and flexibility in scheduling being stronger factors.

Let us dive a mite deeper into what holiday hires want:

Interestingly, retail stores are preferred over restaurants, as the former offer staff discounts on merchandise. This means employees need to spend less on gifting!

So what should an organization do?

Plenty. Read on below for some tips: